During December and January it was a real pleasure to go back to my North West roots and work on Coronation Street for a couple of episodes – dealing with the dramatic fire on Peter Barlow’s boat. This was my second outing on Corrie (you can read about the first on another news post) – but this was my first time on the newly built set at Salford Quays – Media City. Once again, the cast and crew were a joy to work with and generous to the extreme – treating me as part of the Corrie family.

I was playing the role of Fire Officer – Incident Commander  – the person responsible for all aspects of an emergency response. The incident commander sets priorities and defines the organization of the incident response teams and the overall incident action plan.

The great pleasure that comes with this kind of role is working alongside the genuine Fire Officers who are background artists on set – they are effectively demonstrating how they do their job on a daily basis. A big shout out to the friendly guys at both Staffordshire and West Midlands fire services for helping me out with some basics and also for driving me at full tilt along Coronation Street at 3.30 in the morning. That was a surreal experience to say the least! See the various photos  – including the fire engine that we arrived in at 3.30am and a few snaps of yours truly. 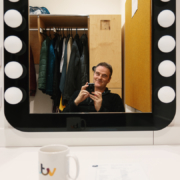 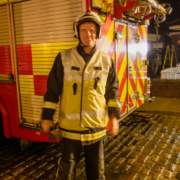